on June 23, 2015
SUPERSUCKERS FANS FLY THE FINGER AT CANCER 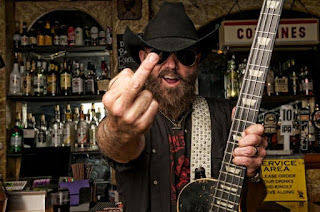 For Immediate Release – (Monday, June 22, 2015) Eddie Spaghetti, front man for Seattle's ass-kicking saviors of rock and roll, the Supersuckers, has been diagnosed with Stage 3 oropharynx cancer.

In order for Eddie to undergo immediate surgery and radiation treatment, the band has cancelled its upcoming European tour and also postponed work on the follow-up to last year's Get the Hell.

Within hours of learning this news, friends of the Supersuckers responded in the ass-kickin', never-say-die manner you'd expect from fans of "the Greatest Rock and Roll Band in the World," by raising more than $20,000 in the first 24 hours of the campaign to Support Eddie Spaghetti's Cancer Fight.

"I have been blown away by the incredible generosity of friends and strangers," says Eddie. "It shows you that even the darkest times can offer some light, some hope. Thanks everyone."

The Supersuckers played its last show (for now) on Thursday, June 18 to a packed house at Seattle's Tractor Tavern. Among the evening's highlights was a performance of the Ramones' "I Believe in Miracles," featuring surprise guests Eddie Vedder of Pearl Jam and Blind Marky Felchtone from Zeke.

"Now apparently the battle begins," adds Eddie. "Friday I went in for my pre-op physical (I'm pretty sure I got a D+) and then surgery is slated for this week … It's weird because I feel fine right now, but I know that I'm not fine and need to go through all this crap to get better."

Watch the Supersuckers and Eddie Vedder performing "I Believe in Miracles" on Consequence of Sound.