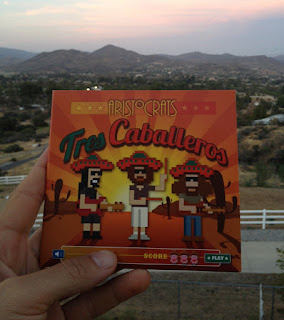 It's now available for immediate digital download and international order shipping through our webstore. And yes, it's also available on iTunes, Amazon, various e-tailers, and select physical stores worldwide.

For those who pre-ordered through our webstore, digital downloads (accessible through a link in your order receipt e-mail) will now be activated, and shipments are all either on the way or have already arrived. International shipments take a bit longer sometimes, but the digital download should keep our global fans busy for a while. :-)

Late to the party? Try going here and watching the top three videos on the page for some tasty previews of Tres Caballeros.

Reviews are starting to come in. Here's an excerpt from a very kind one:

In all seriousness, from all three of The Aristocrats to everyone reading this note, THANK YOU for your support and interest in us as we made this record.

And now, it's time to take the show on the road. Below you'll see our North America and Europe tour dates (more dates will be announced for Europe soon). We can't wait to play this new music for you. Hope to see you out on tour!

Cheers to all,
The Aristocrats

THE ARISTOCRATS
TRES CABALLEROS
EUROPE TOUR WINTER 2015/2016
(many more dates to be announced for early 2016!)
(click here for links and available details on all dates)