Jeff Kollman: checks in from the road with Sebastian Bach 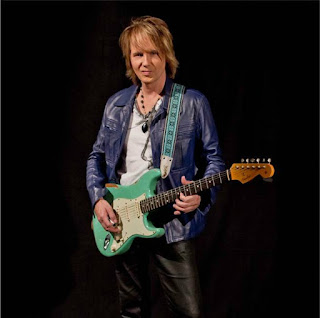 “Hey everyone, I’m six dates into the tour with Sebastian Bach and I’m having a blast!  Playing all these places around the Midwest is taking me right back to the Edwin Dare days and all the rock’n’roll craziness (Kevin) Chown and I lived through when we were kids. It’s so great to be playing with these guys – Sebastian is a powerhouse and killin' it every night, Bobby is a machine (only took us about a dozen year to finally play together in a band situation!), and Kevin is like a musical brother.  You gotta come out and see this band – it just keeps getting better now that we’re dialed in. Check out the cover of Jimi Hendrix' ‘Fire’ www.youtube.com/watch?v=oDpfzChdq8Y we did the other night in Sioux Falls, SD!  We’re at this great amphitheatre in Sterling Heights, MI tonight, ready to rock, and then we've got another dozens shows between Ohio and Texas.  Can’t wait!”
In other Kollman news, the guitarist recently reunited with ASIA feat. John Payne for a one-off show at the Canyon Club in Los Angeles, CA.  Footage of the 1982 classic ‘Heat of the Moment’ can be viewed at this location: www.youtube.com/watch?v=y3zPfJ-pTfw
Kollman will also be back with Japanese superstar Eikicki Yazawa later this fall.  Confirmed tour dates include the ‘Rock In Dome’show at Tokyo’s giant Tokyo Dome on September 5.

Finally, Kollman has announced a demo archives compilation of early recordings from his pre-EDWIN DARE days, set to be released sometime in the fall.  Tentatively titled ‘Jeff & Tommy Kollman – the Heavy Metal Teenage Years’; the album is set to contain 18 songs from the brothers’ formative years in Toledo, OH before they set out to conquer the world with their first band VXN.
Jeff Kollman online:
www.jeffkollman.com
www.facebook.com/jeffkollman
www.twitter.com/jeffkollman
www.youtube.com/guitarscreams