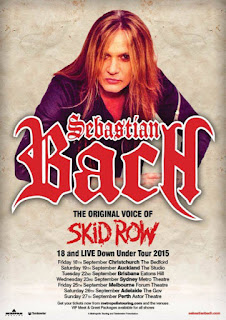 We are pleased to welcome guitarist Jeff Kollman to the band! I first saw Jeff play with Chad Smiths' Bombastic Meat Bats at the Baked Potato in Studio City California a couple weeks ago. He plays in the Meat Bats along with my bass player Kevin Chown, who is also joining us tonight in Kansas City with Bobby Jarzombek on the drums. Jeff Kollman has played with Tony MacAlpine, Asia, to name a few. He's a shredder of the highest order and we are psyched to rock with him!"

Bach has added a string of live dates in Australia and New Zealand this September as part of his 18 And Live World Tour 2015. HIs schedule is as follows: