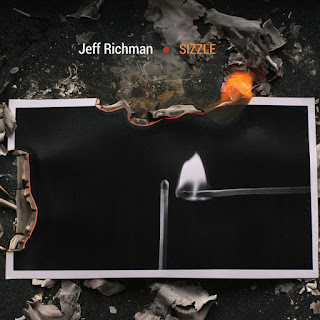 
about
Veteran modern jazz guitarist Jeff Richman will release his seventeenth solo project Sizzle on November 17, 2016. The project joins together longtime collaborators to form a tight-knit band that certainly shares a well-oiled chemistry; with Jimmy Haslip on bass and handling the production, Vinnie Colaiuta on drums, George Whitty (keys/programming), and Gergo Borlai (drums/programming). Richman is given a stunning backdrop to convey his rich musical message. Sizzle has a wonderful guest line-up including: Jeff Beal (trumpet, flugelhorn), Taylor Eigsti (piano), Bob Mintzer (tenor sax), and Mitchell Forman (Fender Rhodes).
The productive collaboration boasts a distinguished history in the jazz canon, and Richman has found his soulmate in Haslip, the trust between the two is a tribute to the power of a like minded musicians. Heavy on soul, funk, fusion and the blues, Sizzle has ten Richman originals and the guest appearances add another layer to this project that does, well -make it sizzle.
The title track kicks things off, a medium tempo funk selection with a strong melody and a fine guest appearance by Jeff Beal on trumpet. Richman's playing is signature and unique as ever, there is always something precise, focused and unusual about every sound he produces from his Strat: his chord voicings, the way he strikes the strings, his relations to the beat, his ornamentation of a melodic phrase, startling use of fast legato flourishes and the careful use of his tremolo bar and his bending of the strings with the fingers of his left hand; all resulting in his own inimitable way of making a phrase sound corporeal, tumbling and rising and pulsating. Richman is virtuosic, dramatic, and he's in a permanent musical state of controlled precision, the energy he transfers effortlessly to the listener is immeasurable.
Richman's lightning-fast runs on "Vibe" and "Hit Parade," moreover, his thoughtful notes on the more relaxed selections like "Say It Isn't So," "Samaya," and "Just 4U," come as no surprise to those who have followed his career. Richman's improvisations are a study in unfolding a musical story, always methodically building and evolving his melodic shapes. "Just 4U" has excellent chromatic phrasing dispersed between octave runs, chordal figures and relaxed held notes. Forman also turns in a fine solo on this selection.
"Hit Parade" and "Sweet" has a guest appearance by Mintzer, whose saxophone playing adds just the right amount of energy to these rock-fusion numbers. Mintzer's flurry of notes and upper register work is excellent. Richman's compositions are ever-evolving and he does a superb job of keeping the musical evolvement moving and the listener engaged. In fact, there is a subtle current that helps make this project so successful and it dwells within the creative and musical compositions themselves.
-Geannie Reid
credits
releases November 17, 2016
Jeff Richman
Vinnie Colaiuta
Jimmy Haslip
George Whitty
Will Lee
Jeff Beal
Bob Mintzer
Gergo Boreal
Mitchel Forman
Jeff Richman