Steve Hackett: To be interviewed by Clive Hickman for Bradley Stoke Radio for the Bristol Concert. 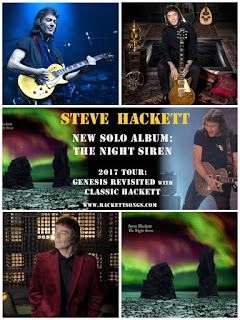 Clive will be interviewing guitar virtuoso and rock legend, Steve Hackett (formerly of Genesis) live, during a Steve Hackett Special on the 13th March, 9.30-10.30am.

Steve will be releasing his new studio album "The Night Siren" on the 24th Mar 17, and will playing at the Colston Hall, Bristol, on the 4th May 17. This is part of his Genesis Revisited with Hackett Classics 2017 tour Europe.

The interview will be played again during the Fri Prog Rock Show on the 17th Mar 17.
Steve Hackett