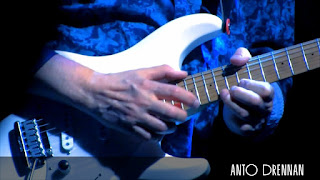 Powerful guitar solo with lots of feel from Anto Drennan, when Mike and the Mechanics performed at the renowned ‘Cultuurpodium Boerderij’ venue, in Zoetermeer, The Netherlands, on Friday, April 19th, 2019.

From Wikipedia: Michael John Cloete Crawford "Mike" Rutherford (born 2 October 1950) is an English musician. He is a founding member of Genesis and one of the band's only two original members. Initially serving as Genesis' bass guitarist and backing vocalist, Rutherford also performed most of the band's rhythm guitar parts - frequently on twelve-string guitar - in collaboration with successive Genesis lead guitarists Anthony Phillips and Steve Hackett. Following Hackett's departure from Genesis in 1977, Rutherford assumed the additional role of lead guitarist on the band's studio albums (beginning with ...And Then There Were Three... in 1978). Rutherford was one of the main Genesis songwriters throughout their career and wrote the lyrics for some of the band's biggest international hits, such as "Follow You Follow Me", "Turn It On Again", "Land of Confusion" and "Throwing It All Away". He was inducted into the Rock and Roll Hall of Fame as a member of Genesis in 2010.

In addition to his work with Genesis, Rutherford released two solo albums in the early 1980s. In 1985, he formed the highly-successful band Mike + The Mechanics, which became a chart-topping act and significant live draw in its own right, and earned Rutherford an Ivor Novello Award for the 1988 single "The Living Years".