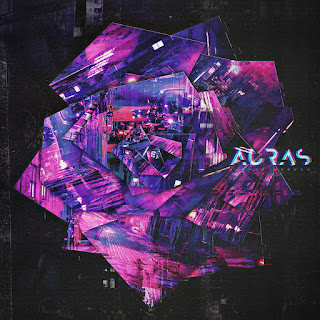 1.Momenta 04:33
2.Pseudo Intelect
3.Erode
4.Another Place
5.Whiteout
6.Disenchant
7.The Last Canary
8.The Demoness
9.Essence
10.Abyss
about
The music of AURAS isn’t “challenging” for its own sake. The goal is to inspire, to push upward and persevere. The ambitious and evolving quartet aspire to a “progressive” ideal in its purest form, each of them committed to the power of smashing boundaries.

The band destroys any notions of the dreaded “sophomore slump” with their moving groove-metal masterpiece, Binary Garden. It’s ten songs of psychic exploration across musical frontiers. It could be mistaken for the work of alchemists or shamans, were it not for the warm charm of four lads from Waterloo, Ontario who worship Super Smash Bros. and beer pong with nearly as much dedication as their discipleship of groove.

A conceptually driven head trip worthy of an episode of “Black Mirror”, the new AURAS album explores the complex relationship between humankind and technology, as people evolve from symbiotic parts of mother nature into cybernetic bits of code. The intellectual depth of the subject matter on Binary Garden is juxtaposed by its immediate accessibility. The expansion of AURAS into bigger melodic hooks is more suited to the digital single oriented era than ever, even as Binary Garden works as a cohesive whole.

Binary Garden saw the band members challenging themselves like never before, from the writing stage through the production process. They shook off preconceived notions and embraced more “clean” singing and simpler structure without sacrificing their signature sound. The end result features more atmospherics alongside a bigger “feel.”

AURAS continue to throw new curveballs, pulverizing through tight musical corners with precision, filling their songs with rhythmic twitches and warped riffs that beckon listeners down a new rabbit hole with each rewarding repeated listen. It’s all imbued with a deep sense of connection to the audience and an emphasis on communication. AURAS shouldn’t just be listened to. This is music that simply must be experienced.
credits
releases July 12, 2019