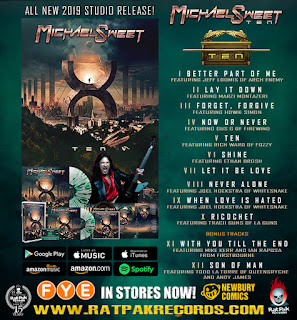 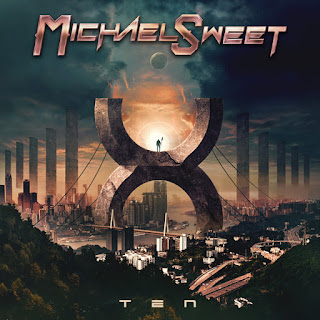 On the subject of guest musicians Michael comments, “There is a different player appearing on every song. It started out where I was just going to have a couple of guest appearances on it, then I decided that it would be really interesting to bring in different players for every song. I started putting names out there and reaching out to people, and they started agreeing to do it. And then I had guys reaching out to me."

Regarding the musical direction of the album Michael states, “I’m very excited about this release, there are old-school, straight-ahead metal ideas in the vein of Judas Priest, Dio and Iron Maiden, all the stuff I love listening to!”

As for the "Ten" album title, Sweet recently stated, "It's called 'Ten' cause it's my tenth album, and because there is a title track on there about the Ten Commandments — a really powerful song. There's real heavy stuff. It starts kind of smacking you in the face and it ends kicking you in the gut."
TRACK LISTING
01 Better Part of Me (featuring Jeff Loomis of Arch Enemy)
02 Lay It Down (featuring Marzi Montazeri)
03 Forget, Forgive (featuring Howie Simon)
04 Now Or Never (featuring Gus G of Firewind)
05 Ten featuring (Rich Ward of Fozzy)
06 Shine (featuring Ethan Brosh)
07 Let It Be Love
08 Never Alone (featuring Joel Hoekstra of Whitesnake)
09 When Love Is Hated (featuring Joel Hoekstra of Whitesnake)
10 Ricochet (featuring Tracii Guns of LA Guns)