Alex Lifeson: gives away his amp to a young fan (Zack) 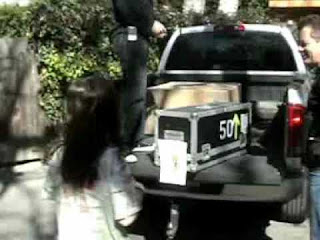 The Hughes & Kettner website posted a great video story on their website which demonstrates just how cool and generous of a guy Alex Lifeson is. Back in January at the winter NAMM show in Los Angeles, Hughes & Kettner had one of their signature Alex Lifeson TriAmps on display. One young fan named Zack Tabori asked if he could play it and proceeded to skillfully jam out some Rush licks. He so thoroughly impressed the Hughes & Kettner representatives there that they took down his contact info and planned to have Alex send him an autographed picture and some tickets to a show. Alex decided to one-up that offer and just give him one of his amps from the tour instead! There's a video of the whole story including the surprise delivery of the amp to Zack's house.

Alex Lifeson gives away his amp to a young fan (Zack)