John 5: Learn what you love 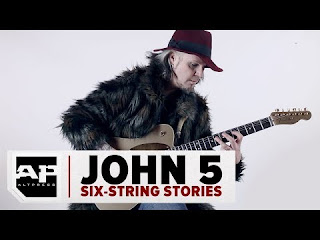 World renown guitar virtuoso and monster enthusiast, John 5, took a break from touring with The Creatures in support of their explosive shred-fest of a live record "It's Alive!" to visit the offices of Alternative Press and...play "The Brady Bunch" theme song...

In this APTV exclusive, John 5 discusses how television (the TV set, not the band...) was his first musical influence, the inexplainable feeling he gets when he hears a great riff and his contentment as both Rob Zombie's resident axe man and leader of The Creatures.