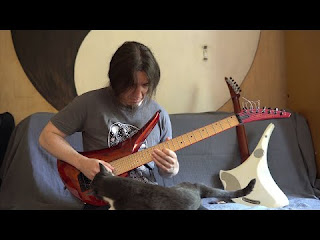 Yuki wasn't really into shredding that day and he even used his teeth a little bit to convey the message. I decided to include the meow take along the regular one :)

This is a guest solo I played for my friends from a progressive metal band Asymmetry. The song is featured on their album Fragility.
https://youtu.be/6n9fpOZ2uwE

This one was fun! Song harmony suggested harmonic minor for the solo, but I felt it was too obvious choice, and managed to squeeze some Lydian in there. I also included a small tribute to one of my favorite guitarists. :)