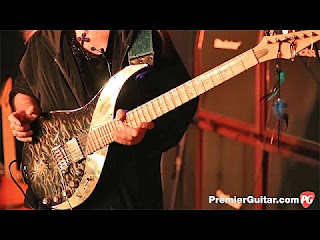 One could argue that Uli Jon Roth invented neo-classical electric guitar and brought it to the masses through his work with the Scorpions in the ’70s. PG’s John Bohlinger caught up with Roth during his tour with Jennifer Batten and Andy Timmons for a look at his high-powered setup.

Originally a Strat man, Uli felt limited by the instrument and wanted something with more frets and a wider range of tonal options. The solution came in the form of the Dean Sky Guitar. Above the 27th fret, this scalloped-fret monster switches to whole-step fret spacing. The Sky Guitar's pickups are a custom four-coil humbucker with a second pickup hidden under the 24th fret. The electronics run off of phantom power via a stereo 1/4” inch input cable from a proprietary power source.