News:
17-07-2007:
Thomas Bressel competition close date December 15, 2007. You can save Christmas by winning the Father Christmas hood from Thomas Bressel. The competition is a duel in which you will, with your guitar, play over tracks posted by Thomas. Visit
www.thomasbressel.com for details.

26-07-2007:
Another video song, this time a demo song from N-R Korsakov, a very popular speed fest, was recorded for an instructional video on e-guitare magazine. The lesson covers monophonic tapping with 8 fingers, a very good exercice to start learning this technique.


25-07-2007
video reposted 5 hours later...to keep me on my toes...Thomas Bressel releases a video from his second instructional DVD about sweeping techniques. The full version of this song was on his first album "Influences Of Time" available from his web site.


11-07-2007:
8 fingers tapping technique DVD from e-guitar magazine, I show you any samples from my first official DVD "home made". The video is a 1h 15m long guitar lesson, susbtitled in English. You could order this video soon on www.thomasbressel.com


07-07-2007:
Thomas Bressel provides a demo song from Beethoven recorded for an instructional video on e-guitare magazine. These lessons cover polyphonic tapping with 8 fingers.

08-05-2007:
This time it's Thomas Bressel with Youri De Groot ripping it up during the support Act for Paul Gilbert's Concert...Vigier will be happy ;o)


The mystery of mars 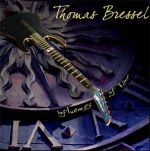 The CD features Ron "Bumblefoot" Thal, Christophe Godin, Yann Armellino and Youri De Groote.Check his web site for sound samples You can buy it from his web site, but you must become a member to do so.

He hopes to have it ready on the January 1st.

15-01-2004:
The Christmas has been removed from the server but you can still download five of the songs from the mp3 section of his web site.

Background:
As a French guitarist, Thomas Bressel is another guitarist who like Richard Daudé has a promising future. Thomas likes many styles of music from straight ahead metal bands like Metallica, de rigueur Shrapnel shredders, classical composers and gypsy jazz.

He has studied classical guitar from the age of 16 in a music school. After studying classical music and Jazz. he passed the final exam obtaining a 2nd acamedy music prize.

He became influenced by players like Joe Satriani and Yngwie Malmsteen, while still playing in metal covers band. Later started teaching guitar in a modern music school whilst continuing to take classical lessons.

Over the coming years he played in a Gypsy Jazz Band in order to play Django Reinhardt’s songs. He later worked with Karl Ribot froming a tribute band covering 80's guitar bands.

Following an extensive period of writing several volumes(8 books) of electric guitar lessons, he has been working on a number of new mp3 and CD projects. The mp3 project was relased over christmas 2004, from his web site. The CD contains 5 guitarists including Ron Thal and Thomas keeps you up to date with his progress on this CD on his web site.

You can check out some of his videos' of Thomas playing of listen to some mp3's.