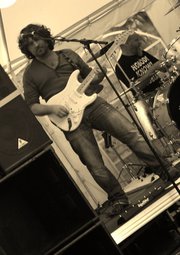 Congratulations to Owen Edwards, founder of "All Out Guitar" and the associated Guitar Idol series of events.

Created by: Owen Edwards
More info
Some of the best guitarists in the world are playing live at the Red Soxx 'End of Summer Festival' on Saturday August 27th, which is part of the Catworth Beer and Music Festival (Friday August 26th- Sunday August 28th) held at The Racehorse in leafy Catworth.

In addition, this August is also Owen Edwards 40th Birthday - so we're combining them to make one mega bash!

In addition to Red Soxx ( http://www.myspace.com/red​soxxband ) playing their critically acclaimed brand of classic rock, world renowned guitarists including Andy James ( http://www.andyjamesguitar​ist.com/ ), Guitarist Of The Year 2000 winner Chris Francis ( http://www.chrisfrancis.ne​t/ ) the lads from Southern Rockers Medicine Hat ( http://www.myspace.com/med​icinehatuk ) - plus more yet to be confirmed - will be guesting with the band and/or playing exclusive solo sets.

This line up of stellar guitarists is a must see event - and the first time they've been on the same bill since the legendary Alloutguitarfest in September 2007!

Music is due to start from approx 7 p.m. - but with a full Beer Festival plus tons of activities available all weekend why not come down earlier for a real session!