"Hendrix came up the steps, he asked me how many people were there, and what it was like. I said there's over 500,000, they've all come to see you." Chris Weston who was working as an electrician, recalls meeting Jimi Hendrix backstage at the 1970 Isle of Wight festival. "He was nervous - he said to someone 'How does God Saves the Queen go?'" The performance was Jimi Hendrix's last UK show before his sudden death in London on September 18, 1970. bbc 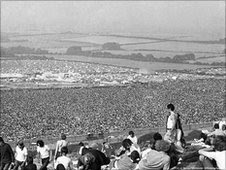 This show was massive and featured this line up:

Then as part of the documentary,  I heard Greg Lake say that ELP had tried to get Jimi Hendrix to join the band... which would have made them HELP. Now that would have been special... and something I didn't know before... I always like a day when you learn something new. :)


On several occasions in 1969, The Nice (with Keith Emerson on keyboards) and King Crimson (with Greg Lake on bass and vocals) shared the same venue, first on 10 August 1969 at the 9th Jazz and Blues Pop Festival in Plumpton, England and on 17 October 1969 at Fairfield Halls in Croydon, England. Emerson and Lake actually met, however, at Bill Graham's Fillmore West in San Francisco and soon tried working together. The pair found their styles to be not only compatible but also complementary. They wanted to be a keyboard/bass/drum band, and so sought out a drummer. Before settling on Carl Palmer, who at that time was a member of Atomic Rooster, they approached Mitch Mitchell of The Jimi Hendrix Experience. Emerson and Lake were uninterested in Mitchell, however, as he showed up for a 'jam' session with an arsenal of guns and unruly bodyguards. Hendrix, tired of his band and wanting to try something different, expressed an interest in playing with the group. Since Emerson and Lake had settled on Palmer by then, this led the British press to speculate about a supergroup called HELP, or "Hendrix, Emerson, Lake and Palmer".[3] Because of scheduling conflicts, such plans were not immediately realised, but the initial three planned a jam session with Hendrix after their second concert at the Isle of Wight Festival (their debut being in The Guildhall, Plymouth, on 23 August 1970), with the possibility of his joining. Hendrix died 26 days later, and the three pressed on as Emerson, Lake and Palmer. Greg Lake made this comment on ELP's discussions with Hendrix: "Yeah, that story is indeed true, to some degree...Mitch Mitchell had told Jimi about us and he said he wanted to explore the idea. Even after Mitch was long out of the picture and we had already settled on Carl, talk about working with Jimi continued. We were supposed to get together and jam with him around August or September of 1970, but he died before we could put it together." Carl Palmer had previously been the drummer for the highly successful psychedelic band, The Crazy World of Arthur Brown. ELP were, from the outset, a prototype of the 'rock supergroup'. Aside from providing vocals, bass guitar, electric guitar and lyrics, Lake also produced five of their first six albums (Brain Salad Surgery being co-produced with Pete Sinfield, who had recently left King Crimson). more