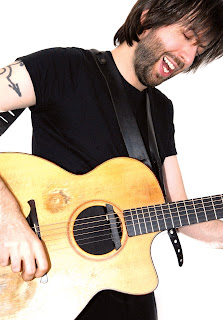 The Leeds Guitar Night is back for 2011, and Jon Gomm is hosting a fantastic international line up at The Wardrobe in the Quarry Hill Arts Quarter, where you’ll see and hear the acoustic guitar played every way you could imagine and possibly more! Jon's guests this year are modern pioneers of the acoustic guitar, revered by their fellow players around the world.

Firstly the incredible Erik Mongrain from Quebec, who astounded guitar lovers worldwide with his phenomenal composition ‘Airtap’ in which debuted his radical lap tapping technique. His 2009 appearance on Later With Jools Holland further expanded his reputation as a virtuoso who constantly seeks to push the boundaries of his instrument. “His awesome talent is audible and visible for anyone who has encountered his playing.” (Acoustic Magazine) Jon and Erik have been cohorts for some years but this is the first time they will share the same stage.
http://www.erikmongrain.com/

The second guest is the wonderfully eclectic acoustic virtuoso Giuliano Modarelli whom Jon met at College studying Jazz in Leeds. Originally from Italy, his unique and exceptionally innovative style is a subtle blend of World Folk, Arabic, Flamenco, Latin and Eastern European. Giuliano regularly tours and furthers his knowledge in India where he collaborates with many outstanding South Asian artists such as Bickram Ghosh and Paban Das Baul. "A fusion barometer would have registered Modarelli's originality and his ability to tap into Jazz's innate power of seduction." (The Sunday Express)
http://www.giulianomodarelli.co.uk/

And of course: Jon Gomm – Leeds’ own guitar virtuoso, Acoustic Magazine calls him “One of the world’s most successful, gifted and inspirational guitarists”. This concert will also be the Leeds launch for Jon’s new project ‘The Domestic Science Singles Series’. Jon will be releasing a single each month starting in September with the uplifting anthem “Passionflower.” The second single in the series will be released and revealed on the same day as this concert. To celebrate we’re inviting the Leeds Guitar Night audience to an aftershow party at The Wardrobe which will continue til 2am.
http://www.jongomm.com/