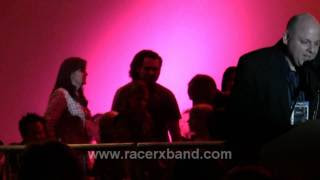 Mike Varney from Shrapnel Records tells a story of being introduced to Paul and then introduces Racer X at the 2009 NAMM show to celebrate the 20th Anniversary of PGM guitars.

In order to properly celebrate the 20th anniversary of Paul Gilbert using Ibanez guitars, Ibanez promoted Racer X live! This was the first USA show since May 25, 2001.

This is recorded in 1080p, but rendered in 720p. This is the highest resolution that YouTube can display correctly.