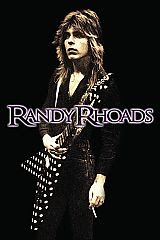 ****The Randy Rhoads Biography will ship between the last week of July and the first week of August, or sooner.

Before his tragic death at the age of 25, Randy Rhoads was on a fast track to being hailed by critics and public alike as the greatest rock guitar player of all time. Over a short two-year period, Randy recorded two seminal multi-platinum albums with Ozzy Osbourne, which are heralded today as among the most noteworthy recordings in hard rock music history. Through his jaw-dropping six-string work on songs such as “Crazy Train,” “Mr. Crowley,” and “Flying High Again,” Randy Rhoads achieved legendary status as a guitar icon and his artistic legacy continues to grow with each passing year.

A brilliant guitar virtuoso, Randy’s masterful ability of bridging rock and classical techniques, helped him forge a groundbreaking style of guitar playing. In 1981, Guitar Player magazine honored Randy by selecting him as best new talent of the year. Humble and self-effacing, Randy refused to rest on his laurels. Instead, being bestowed with this prestigious award motivated him to strive for greater creative heights. Tragically, Randy’s life ended much too soon when on the morning of March 19th 1982 he was killed in a small private plane that careened into the garage of a plantation home in Leesburg, Florida. http://velocitybooks.org/shop/randy-rhoads/
Randy Rhoads