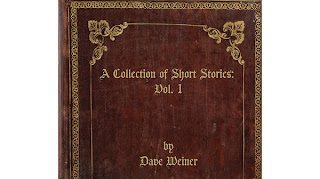 A Collection of Short Stories: Vol. 1 -  is the first installment from Dave’s raw, unaccompanied instrumental acoustic series. “I wanted the listener to feel as if I was playing the guitar for them", Dave says, "like they were right there in the room with me. The movement on the strings, the breathing. The wood of the guitar is speaking, and it’s all captured in its beautiful natural form."

For the last 13 years, the only constant in Steve Vai’s touring career has been guitarist, Dave Weiner. Fresh out of college in Pennsylvania, Dave moved to Los Angeles in 1998 to attend Musician’s Institute: Guitar Institute of Technology. “No matter how many years of schooling I went through, after it was over, I always said I was heading to LA to go to GIT”, Dave explains. “Since I was 10 years old, I knew guitar was my calling… and school in sunny LA where I play guitar all day sounds like a great place to get something started.” The first day of school, Dave found MI’s job board and faxed in his resume to a local management company looking for interns. That night, Dave received a call from a woman named Ruta Sepetys. "It was a name that I recognized, but didn’t know where from. We chatted and she eventually named her clients, the last of which was Mr. Steve Vai." Once Dave met Mr. Vai during his intern experience with Ruta, Dave submitted his demo he had been working on during MI. Weeks after turning in his demo, the phone rings. "I really liked your demo. You can obviously play.", said Mr. Vai. "I’m about to start rehearsals for a world tour, I could use another guitar player. Would you like to join the band?” Dave Weiner has been recording and rocking on tour with Mr. Steve Vai ever since.

Dave Weiner is opening for Mr. Vai's Story of Light tour to support his new record, "A Collection of Short Stories: Vol. 1." The world tour has already begun and will continue on til late 2012. For tour dates, visit vai.com