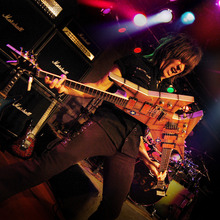 Congratulations to Michael Angelo Batio... now on to to get a big total

I like this package... now if I could just play :)

Play a 30 to 45 second solo on a song to be included on the "Intermezzo" album. Also included is a certificate of authenticity stating you played on "Intermezzo." Your name will also appear in the special Thank you Section of the CD and website plus, you will receive a personally autographed CD of the "Intermezzo" album + the digital download 2 weeks before the release date. In addition to all of this, we will put your photo in the CD booklet and we will post a video of you playing the guest solo or any other video of you that you want to promote on our official M.A.C.E. Music YouTube site!
Limited (4 of 5 remaining)


Michael Angelo Batio
Thanks to everyone supporting my "Intermezzo" album. We reached our initial goal and have 17 days left! If you are going to order my new record when it's released I am asking you to pre order it now. I still really need your support! Below is the link. Thanks!