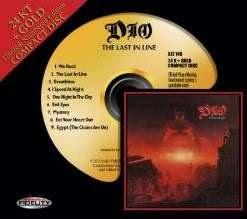 Following the well-deserved success of Dio's debut album, Holy Diver, Ronnie James Dio did not mess with that winning formula when he released the band's second studio album, The Last in Line. The album is full of heavy and hard rocking songs that draw upon the fantasy lyrics for which the band is known, lots of guitar solos and of course, Ronnie James Dio's distinctive and unique voice. The 1984 release was the first Dio album to be certified Platinum. The line up on the album is the same as that on Holy Diver - Dio, Vivian Campbell, Jimmy Bain, Vinny Appice plus the addition of keyboard player Claude Schnell who added to the band's sound.

Dio's classic "The Last In Line" album in a very special numbered, Gold Disc format. A great addition to any audiophile's collection.

What makes the Gold Disc so special?
"Our 24K+ compact discs reproduce the ultimate sound of a classic recorded performance without the irregular plated surfaces of standard aluminum discs. Our 24K+ series brings you classic music in deluxe packaging with see-through slip cases. We only use the original vintage mixes played back on a specially constructed playback deck. Here's where the PLUS comes in: Engineers Steve Hoffman and Kevin Gray use their 30 years of expertise to create the best sounding versions of the music ever released. When they are satisfied with the end result, the final digital master is shipped directly to the manufacturing plant for etching in "real time" onto the glass surface by laser. The end result of this unique mastering process is a compact disc with the warm sound of the original analog master tape combined with a genuine 24 karat gold surface free of any type of physical defect making our 24K Gold CD series truly one of a kind." --Audio Fidelity
Vivian Campbell