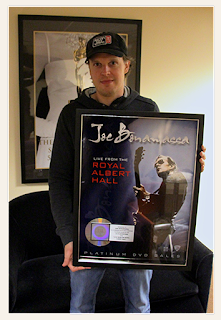 winning blues rock star, guitar hero and singer-songwriter Joe Bonamassa's Break-through DVD release, Joe Bonamassa – Live From The Royal Albert Hall, was recently certified by the Recording Industry Association of America (RIAA) for PLATINUM DVD SALES status (which equals at least 100,000 units in sales). This achievement is a huge accomplishment for any independent record label, especially in a world where a rapidly increasing amount of music lovers are buying less and less music. When the RAH DVD first released in October of 2009 it debuted at #6 on Billboard Magazine's Top Music DVD Chart.

The film captures the intensity and excitement of the May 2009 show where Joe's Guitar Hero Eric Clapton joined him for a scorching rendition of "Further On Up The Road" and it also marked Bonamassa's headlining debut at arguably the most prestigious concert venue in the world' The Royal Albert Hall. "May 4, 2009 was a day 20 years in the making", says Bonamassa. "I have never been so honored in my life. It was truly larger than the sum of its parts."