PRS Press Release:
The Custom 24 is the quintessential PRS guitar. This iconic instrument was the first model that Paul Reed Smith brought to the public at PRS Guitars’ first Winter NAMM show in 1985 and has been a top seller ever since.

Always retaining its fundamental character, the Custom has been updated several times over the past 28 years. New for 2014, the Custom 24 will be offered with a Floyd Rose tremolo system in both the Core and SE product lines.

The Core “Floyd” Custom 24 is equipped with the time-tested Floyd Rose “Original” tremolo system and PRS’s \m/ (metal) pickups (uncovered). The Floyd Rose “Original” tremolo and locking nut tuning system, is a double-locking design precision-made from high quality steel, allows players to lock the guitar in tune at the nut and at the bridge which keeps the guitar in tune even during the heaviest dive-bombing sessions. 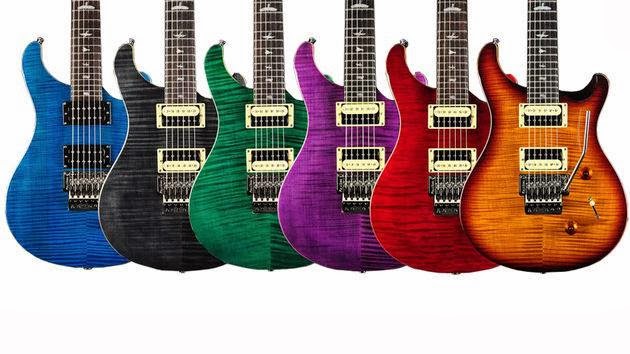 The Custom 24 will continue to be offered without the Floyd in both the Core and SE lines. The Core model features the choice of PRS’s 59/09 treble and bass pickups or HFS treble and Vintage Bass pickups and PRS’s patented tremolo system. For 2014, both Core Custom models are available in PRS’s six new maple top colours (Aquableux, Blood Orange, Faded Whale Blue, Leprechaun Tooth, Obsidian, and Violet) and feature a rosewood headstock veneer with inlaid “Paul Reed Smith” signature.