Neil Zaza, Christophe Godin: Chance of a lifetime to see Neil and Morglbl in the UK as dates are announced 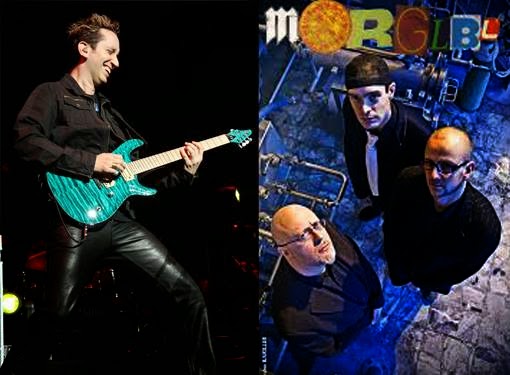 Neil Zaza
Not only has guitarist Neil Zaza helped to define the genre of melodic instrumental guitar, he has become a worldwide ambassador for the instrument itself. His melodic compositions have changed the way musicians play, and what audiences worldwide demand out of their guitar heroes.

With fiery technical brilliance and breathtaking musical interpretation, Neil Zaza has defined himself as the instrumental guitarist with an unparalleled ability to combine solid, catchy songwriting with a keen melodic sense and technical fury.

From his virtuoso rock solos, to laying a funk groove, to demonstrating his classical prowess by performing Bach and Mozart compositions, Zaza's extreme versatility has been showcased worldwide in concerts, clinics, festivals, as well as on his own solo instrumental albums. Zaza has shared the bill with Joe Satriani, Steve Vai, Dweezil Zappa, Steve & Mike Porcaro (Toto), Yngwie Malmsteen, Vinnie Moore, and Andy Summers among countless others. He has performed on albums by Dweezil Zappa, Eric Carmen, Michael Stanley and also supplied guitar tracks for a Stewart Copeland-produced movie soundtrack

A charming young girl once called to book the band for their first show. Before they even had a name ! M-ö-r-g-l-b-l was the first group of letters that came to Christophe's mind that day !!! Mörglbl was born !

Led by guitarist extraordinaire Christophe Godin as well as the phenomenal Ivan Rougny on bass, Mörglbl gained an international reputation with the release of their two first albums in 1997 and 1998.

In 2006, after a break of a few years, Mörglbl rebanded with the release of « Grötesk » (Laser's Edge 2007) and became quite popular all around the globe and particularly in the US.

In 2008, Aurélien Ouzoulias joined the band. An in demand drummer both for live performances and studio sessions, as well as an all styles performer, he gave a kick to the band's music. Mörglbl released « Jäzz for the Deaf » in 2009.

Mörglbl has released 4 albums for US record company Laser's Edge, and their 5th one, is to be released in early 2012 as well as a live DVD.

Mörglbl's live performances are crazy, and the band mixes together powerful metal riffs as well as subtle jazz harmonies, with a groovy attitude and their trademark goofy humor. The band is often described as Primus meets Steve Vai and Allan Holdsworth, with flavours of Frank Zappa !