Hassan Hajdi: a master-class with the master - great legato playing in this snippet 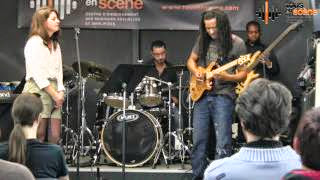 www.tousenscene.com Born March 17, 1966 in Toul (Meurthe et Moselle) is a guitarist and composer. Hassan self-taught musician playing guitar since 1975. At the age of nine so it moves from classical to rock under the influence of J. Hendrix, inspired among others Johnny Winter, David Gilmour, Mark Knopfler, Satriani, Vai, Mike Stern Robben Ford, Eric Johnson, George Benson, Jeff Beck, Allan Holdsworth ... From 1988 to 1996 he taught at CNMC Nancy. From 1988 to 2012 he participated in many masterclasses among other Defunkt, TM Stevens, Paco Sery ... From 1989 to 2012 he played Rock in various formations. In 1995 he joined the legendary progressive rock group French "ANGEL" orchestrated by Christian Decamps. To date he has recorded seven studio albums and several live performances and DVD of the same group. Hassan From 1996 to 2012 taught at the May (Music Academy International) of Nancy, one of the largest school of current European music. Between 1999 and 2008 he accompanied Jimmy Oihid. From 2000 to 2001 he accompanied Samaha (singer Chakaponk Group) in the first part of Axel Bauer and Julien Clerc. From 2002 to 2003 Tour with Anggun Asia. From 2003 to 2004 tour with Richard Bohringer and Adventure. From 2005 to 2012 Composition and recording two albums with Lara Guirao, songwriter, known on stage and film actress. 2007 Registration of the album with Chraz columnist humorist .... From 2007 to 2012 Hassan joined the band 500, 1000 and 2000 under the auspices of singers Jacky Locks and shared the stage with, I Muvrini, Patricia Kaas, Chimene Badi, Faudel, Star Academy, Garou, Natasha St Pier, Laurent Voulzy, Bernard Lavillier, Emanuel Moire, Julie Zenatti Laurent Solal (rock opera Mozart), Helene Segara, Pablo Villafranca, Patrick Fiori, Anggun. Hassan In 2010 plays in the film "Henry" Francis Kuntz (Groland) and Pascal Remi. Hassan in 2011 invested in the creation of his first solo album to be released by the end of 2012