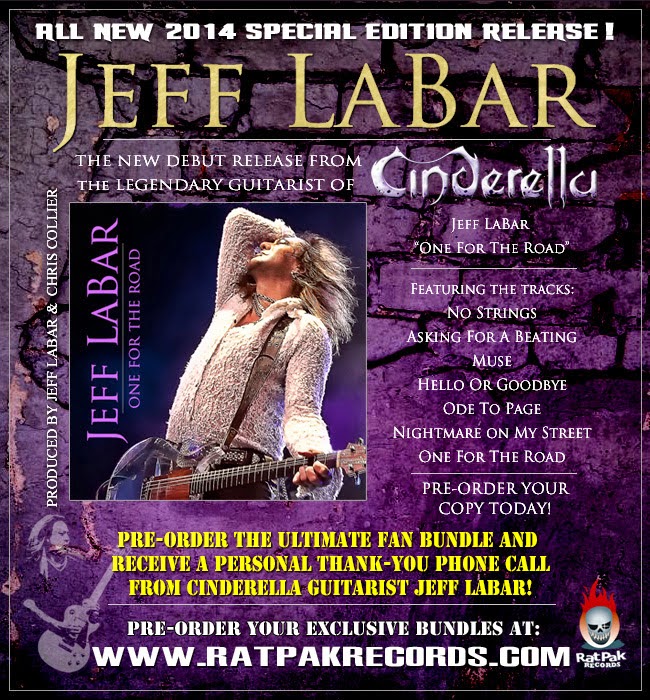 RAT PAK RECORDS SET TO RELEASE "ONE FOR THE ROAD"
THE DEBUT CD FROM CINDERELLA GUITARIST JEFF LABAR!

Cinderella guitarist Jeff LaBar's "One For The Road" was recorded in Nashville, Tennessee with long-time friend and noted engineer Ronnie Honeycutt, and mixed & mastered by Chris "The Wizard" Collier (KXM/Lynch Mob/Lita Ford). Jeff's first solo release entitled "One For The Road" highlights both his songwriting and guitar playing abilities. It is also the first of two, seven song offerings of classic, hard rock style material that will be released via Rat Pak Records. About the album Jeff states, "This record is written about parts of my life since the hay-days of Cinderella....and there is a lot more where that came from!" The song "No Strings" features Tesla's Troy Luccketta on drums and was mixed by Cinderella drummer Fred Coury. The song "Ode To Page" is Jeff's acoustic tribute to Led Zeppelin guitarist Jimmy Page. Featured tracks include: "No Strings", "Asking For A Beating", "Muse", "Hello Or Goodbye", "Ode To Page", "Nightmare on My Street" and "One For The Road". Tracks on the CD range from classic, early Cinderella-style hard rock, to groove-laden blues rock and really captures the magic and spirit of the genre that Jeff helped create! Official release date is set for August 26,2014.