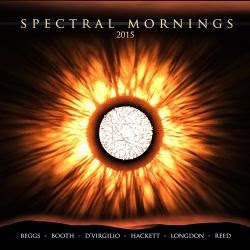 The Esoteric Antenna label is pleased to release and support the new EP in aid of the Parkinson’s Society UK, "SPECTRAL MORNINGS 2015”.

The project was the brainchild of ROB REED (of Magenta & Kompendium) who explains; "I’ve always loved the piece Spectral Mornings by Steve Hackett, (the classic instrumental from his 1979 album of the same name). It had a great guitar melody and thought it would be amazing to re-record with the addition of some lyrics. I contacted David Longdon from Big Big Train who I wanted to sing it. David wrote the lyrics and we did a demo, which sounded fantastic. I also had the idea of it being a duet, so we asked Christina Booth from my band Magenta to sing it. We then had to play the demo to Steve Hackett to make sure he liked it, which thankfully he did. He kindly agreed to play guitar on the track, which was wonderful. I really think we have been respectful to the original piece and hopefully brought something new to it as well”.

Rob adds; "We were also lucky to have one of the best rhythm sections to play on the song, namely Nick Beggs on bass (of Steven Wilson’s band) and Nick D’Virgilio on drums (from Spock’s Beard). As it was a one off project we really wanted the proceeds form the sales to go to a charity. Myself, Christina and Steve Hackett have all lost close family members to Parkinson’s disease, so we decided to donate all the proceeds from the sale to Parkinson’s Society UK, who are funding research into a cure for this terrible affliction."

N.B This title is released 27th April and will not be dispatched before this date.