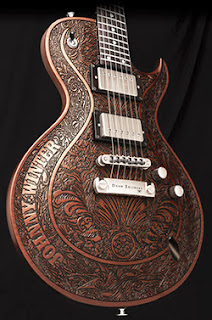 Chicago, IL August 31, 2016 – Dean Zelinsky Guitars today announces they are giving away the $2,900 Johnny Winter prototype guitar used to debut the line at the 2016 Winter NAMM show. One lucky winner will be chosen through an online giveaway. The drawing will be held October 23rd, 2016.

“This Johnny Winter prototype is a truly special guitar,” stated Zelinsky. “It’s exciting that some lucky winner will have a chance to own it. I am giving away this incredibly expensive showpiece guitar to call attention to my new signature brand, sold exclusively online at factory direct pricing – www.deanzelinsky.com.”

Contestants can easily enter the drawing by simply clicking on the Fishbowl at www.deanzelinsky.com/giveaway or going to www.fishbowlprizes.com where they can also increase their chances to win by sharing on Facebook and Twitter.

The Johnny Winter Signature is the same guitar made by Zelinsky that Winter had been playing and touring with in his most recent years, until his untimely passing in July, 2014. This exclusive collector’s guitar features a highly engraved flame maple top specially designed for Winter with his name prominently embossed. Other features include an ultra-thin Mahogany body, a 25 ½” scale 24-fret maple neck, brushed satin nickel hardware, locking tuners and Dean Zelinsky Custom Humbuckers designed hot and bright achieving that Johnny Winter signature tone. Guitars will be $2899 and come complete with Tweed Tolex Hard Case.

Zelinsky launched his new line of Dean Zelinsky Guitars in August of 2013 through his ecommerce website, www.deanzelinsky.com.
Dean Zelinsky