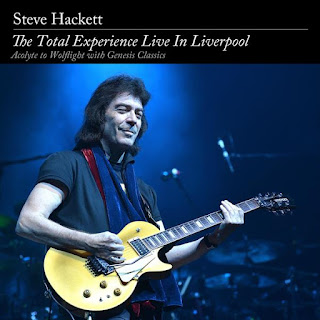 Former Genesis guitarist STEVE HACKETT renowned for his incredible, moody playing style and sense for creating otherworldly melodies recently had several reasons to celebrate. In 2015 for instance, his solo record “Wolflight” hit the charts in Germany and the UK whereas his first solo record, “Voyage Of The Acolyte” turned 30 years old! Known as a fantastic live performer, Hackett and his fantastic backing band including Roine Stolt, Gary O’Toole, Roger King, Nad Sylvan, Amanda Lehman, Rob Townsend as well as a guest appearance by his son John were touring on this occasion with a diverse set presenting classic Genesis tracks plus highlights from Hackett’s solo albums. Recorded and filmed in Liverpool in October 2015, “The Total Experience Live In Liverpool” commemorates the “Acolyte to Wolflight with Genesis Classics” tour and offers a stunning set-list including solo tracks from the epic “Shadow Of The Hierophant” to “Love Song To A Vampire” as well as Genesis highlights including “The Cinema Show”, “The Musical Box”, “Firth Of Fifth”, “The Lamb Lies Down On Broadway”, “Can-Utility and the Coastliners” and more during the second half of the over two and half hour long main show. In addition to that, both the standalone Blu-ray and the 2CD/2DVD deluxe package offer documentary footage allowing an intimate look behind the scenes. “The Total Experience Live In Liverpool” is essential for all Hackett supporters.