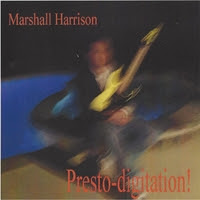 Originally released in 2010 the Presto-Digitation! album has been remastered by Marshall Harrison and is back online


My sound evolved from rock instrumental-Malmsteen and Vai-type music to legato influences from the Jazz Fusion world a la Holdsworth to Frank Gambale. Tasteful solos in Blues River, Jettisoned, and Just One Thing really do say it all: tasteful virtuosity by a bluesy "Holdsworthian legato" master. Spearheading a new approach to modern virtuosity via economy/sweep picking by applying the hybrid picking of the right hand, we were able to achieve heretofore brand new, jaw-dropping effects. Dweezil Zappa, Steve Vai, Scott Henderson, and Brett Garsed have all expressed positive feedback.