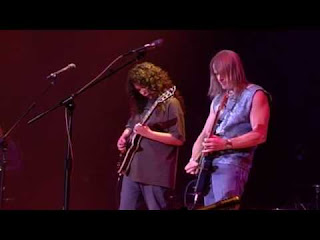 Hey everyone! I wanted to let you guys check out a rare video. It's a video of me and one of my main influences, Mr. Steve Morse, playing one of his songs called "Stressfest". The show was at the Ryman Auditorium in Nashville on Friday, July 18, 2003, at the All Star Guitar Night featuring Les Paul. At that time, I was being filmed for a prodigy show for VH-1 and Camera Planet. I had a wonderful time that weekend and got some life changing advice from Steve Morse and Les Paul. **Filming courtesy of VH-1 and Camera Planet in Coordination with International Cinema Partners**