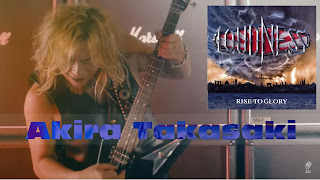 THUNDER FROM THE EAST STRIKES AGAIN!
THE PIONEERS OF JAPANESE HEAVY METAL LOUDNESS ARE READY TO RISE AGAIN WITH THEIR NEW ALBUM “RISE TO GLORY”.

Since its inception in 1981, Loudness have led the Japanese heavy metal scene and embarked on global domination with “THUNDER IN THE EAST” (1985 / #74 US national chart) and “LIGHTNING STRIKES” (1986 / #64 US national chart). They have been frantically acclaimed worldwide.
Now, “RISE TO GLORY”, the first album in 4 years since “THE SUN WILL RISE AGAIN” (2014), is going to be released on 26th January 2018 worldwide and for the first time on earMUSIC (world ex. Japan). The album is packed with aggression, melody and positive vibes.

The vocalist Minoru Niihara says: “The album cheers you up, makes you feel fresh.”

From the rock maelstrom of “Massive Tornado” to the young burning passion of “Soul On Fire”, the life-glorifying “I'm Still Alive”, and the declaration of metal warfare of “Rise To Glory” - all of them serve as supporter songs for the age of turmoil.

The guitar wizardry of Akira Takasaki, hailed around the world as one of the true Guitar Gods, is featured throughout the album. He admits: “I played lots of guitars, more than any other albums this century. There was soul in the sounds” - his performance would surprise even the most ardent of the fans. Together with the guitar solos on each song, there is amazing playing on the instrumental track, leaning towards the progressive side of the band.

Along with the hurtling speed tunes such as “Massive Tornado”, “No Limit” and “Rise To Glory”, the variety of songwriting takes the listener to an amazing journey. “Rain” has the melancholic mood, “Until I See The Light” focuses on the melodic side of the band, and “Let’s All Rock” has a heated call-and-response with the audience to recreate their live performance.

“From the Far East, we came to conquer / Across the seven seas” – Rise To Glory

With “RISE TO GLORY” and the ensuing major scale world tour, Loudness will embark on the biggest global conquest since the 1980's. This indeed is the beginning of their Rise To Glory.

The EU and US version of the album is accompanied by “SAMSARA FLIGHT”, a collection of 13 tracks of the band's early classics re-recorded (originally released in Japan in 2016), including “Loudness”, “In The Mirror” etc.