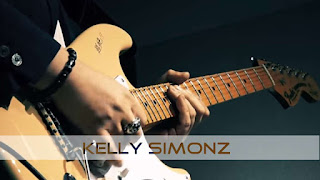 A real tribute to the master guitarist Yngwie J Malmsteen. YJM land in Japan and made a big dent with his guitar playing skills. Japan went nuts for his playing and it's fair to say he's influenced a number of Japanese well known players. This time it's Kelly Simonz.

Towards Burades Day Live This seminar completely reproduces the sound of Yngwie in 1984! We sent it in the form of a seminar. This song only delivers hands for rehearsal but only 80% perfect for perfection degree · I still practice! ! Fender Japan Yngwie Signature Model, DOD 250 (Gray) original, and Marshall 1987 Reissue is not 1960 BX cabinet and everything is vintage, but as you can see, setting up SM 57 in this setting and recording with ZOOM 's MTR was the same as Karaoke I tried to mix it. No, I'm pretty sure it's out, atmosphere is inevitably different from recording on analog tape but I think I was able to get a very atmosphere.

Kelly SIMONZ plays I Am A Viking (Yngwie Malmsteen)