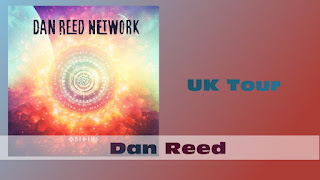 Origins follows DRN’s hugely successful comeback album Fight Another Day (2016). Physical pre-orders for Origins are available from Friday 10th August directly from the Dan Reed Network website. All orders will receive a digital version of the first single Fade To Light as a free download.

To celebrate the announcement of their new album DRN are also extremely proud to share the first single Fade To Light with a music video they feel encapsulates the whole experience of recording Origins.

“The video for Fade To Light is taken from the inaugural live studio recording session at Blueprint Studios in Manchester and is the perfect microcosm for this entire process. What I think really translates throughout is how having an audience in the room fed the band with a unique energy that pushed us to expand our creative horizons. We’re thrilled with the results,” explains Dan Reed.

While recording the album DRN opened the studio doors to the public and invited them in to be a part of an exclusive series of recording sessions that spanned the globe with tracks that would eventually become Origins recorded at Blueprint Studio’s in Manchester, The Power Station in NYC, Nia Studios in Portland Oregon and finally Studio 4 in Stockholm.

The concept allowed supporters of the band to intimately witness the whole process of recording a brand new song from scratch with the band individually tracking drums, bass, guitar, keyboards and vocals before inviting the audience to participate and provide backing vocals for the song as can be seen in the brand new video for Fade To Light. The audience were also witness to a classic Dan Reed Network being re-imagined right before their eyes.