Russ Parrish: Satchel - It was tuned down so I learned the solo with all the dots in the wrong place! 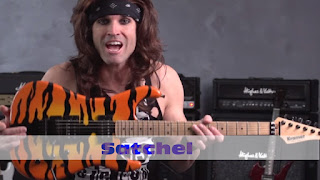 This month I’d like to tell you about a Steel Panther song called “Weenie Ride,” from our multi-maxi-selling 2012 album, Balls Out.
“Weenie Ride” was our very first piano ballad. Our first album, Feel the Steel, was a huge hit in Asian countries, and everyone knows that they love piano over there, so we decided to include a piano ballad on our next record. Pretty smart, right?
Also, when I go to Disneyland I usually see a lot of Asians, and there are a lot of rides at Disneyland, most of them with long lines. So I put two and two together and wrote “Weenie Ride,” which, by the way, has a much shorter line! Just jump right on!
“Weenie Ride” is built around a piano part in the key of A minor. There is, of course, a bitchin’ guitar solo in the song, which I am going to show you in this column. A note about the guitar tuning: I always tune down one half step, like Eddie Van Halen. But when we recorded “Weenie Ride,” I played the solo on a standard-tuned guitar.


A question I’m often asked, aside from, “How can you possibly be that good looking?” is, “What do you do to warm up?”

Personally, I don’t think about warming up that much, maybe not as much as most players do. But we’ve been touring a lot lately, and, especially in Europe, there just aren’t any heaters anywhere.

So, basically, I am freezing all day long. Then I’m given a guitar five minutes before we go onstage, and I’m expected to be able to burn right from the start! And there I am, frozen to the bone. So I will usually grab my guitar a few minutes before the show and play through a bunch of the riffs and patterns illustrated in this month’s column.

It’s good to have your fingers warmed up a little for when that first solo comes along in the first song, so one of the things I like to warm up with are legato exercises, where I’ll pick the string once and then sound a long series of notes in a repeating phrase using only hammers-ons and pull-offs.

A good example of something I’ll warm up with is the lick shown in FIGURE 1, which is a repeating six-note sequence performed entirely on the high E string. Play the lick over and over, speeding up and slowing down while striving to articulate every note as clearly as possible. The first note, G, 15th fret, is fretted with the pinkie, followed by a pull-off to D, 10th fret, fretted with the index finger.

I then hammer onto the 12th fret with my middle finger to sound E, followed by another hammer up to the initial G note, and then a double pull-off back down the string to E and D. The sequence then repeats on each subsequent downbeat, but I hammer-on back up to the initial high G, so that the rest of the phrase is performed entirely with hammers and pulls, which is great for developing good fret-hand “traction.”