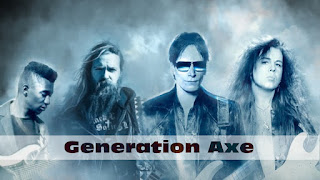 The overuse of the terms “Guitar God and Supergroup” has reduced the integrity of their meaning to mediocrity; however, a tour featuring some of the greatest hard rock guitarists of all time has given the expressions a whole new dimension. Introducing: GENERATION AXE, featuring Steve Vai, Zakk Wylde, Yngwie Malmsteen, Nuno Bettencourt, and Tosin Abasi. The Generation Axe experience goes way beyond simply gathering five guitar greats on one stage to jam. According to Steve Vai, “The idea was to create a seamless show with one backing band and 5 completely accomplished and astonishing guitarists that take to the stage in various configurations, performing some of their solo music and merging together as cohesive co-creators of lushly orchestrated guitar extravaganzas.”

Much of the time when multiple rock guitarists join in jamming, the results are usually conventional and often a mess. But the arrangements of some of the classic rock tracks performed by these 5 insane players makes for a magnificent cacophony of organized chaos unlike anything ever presented before. "Generation Axe – The Guitars that Destroyed the World (Live in Asia)” CD was culled from various performances on their last very successful tour of Asia. It is indeed rare for a line-up of guitar players to create a unique offering and when listening to this wild ride through a kaleidoscope of 6 string mania, it’s obvious that Generation Axe hit the mark and this Pledge campaign offers a variety of unique merchandise, behind the scene footage, and ultimate fan access! You can get everything from signed guitars to listening parties and signed vinyl.

Thank you for your continued support and hope to see you out on the road!