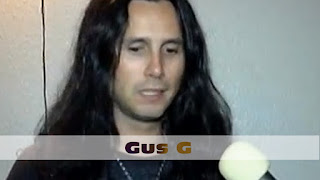 There are those METAL guitarists who at a young age (& out of sheer luck) are in a position to find their audience. Yet, others (just as great OR greater) must be brought out of obscurity into the light for the rest of the world to enjoy; some that come to mind include: Monte Pittman, Jon Donais, Myles Kennedy, Zakk Wylde,....& YES, Gus G! Add to the fact that Gus hails from one of the world's most ancient regions in southeastern Europe & the man's miraculous journey comes into focus. While many of us came to know Gus G. in 2009 when he was chosen to join the Ozzy Osbourne band, its no secret to the metal faithful that Gus's musical foundation had already been tested with stints in Arch Enemy, Dream Evil, Nightrage, Kamelot,...& his mainstay, Firewind. TODAY, the man continues rockin down his unique path by delivering his latest solo offering entitled, 'Fearless'. Released in April 2018 'Fearless' represents Gus G. comin into his own by delivering far more than just a 'guitarist's' record,...but moreso, a group of true metal songs that encompass both a mixture of melodic, HEAVY guitar laden hooks (along with that virtuoso seasoning) that creates more than enough bite to kill any metalheads hunger pangs. SO, when I heard that Gus G. was comin through the Alamo City - I knew I had to get him in front of our cameras to chat. We hooked up with the man on September 14th, 2018 at The Rock Box to talk all about his NEW music, working with vocalist/bassist, Dennis Ward & drummer, Will Hunt,....touring with Vinnie Moore Official Fan Page, upcoming Firewind work, his signature Jackson Guitars - Official! Star guitars & what lies ahead in 2018/2019 for the him. I know you will enjoy this one, as we once again deliver one of the world's most revered guitarists to YOU! ~ El Mero Metal