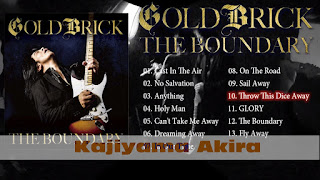 Japan's guitar hero Kajiyama chapter has reached a new singer and completed a powerful hard rock album! Break the silence of ~ 14 years, GOLDBRICK will revive the miracle! The long-awaited 3rd album containing the wisdom that it can possess! The special site is here https://wardrecords.com/page/special/the-boundary/ 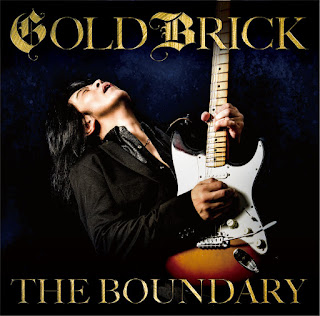 Kajiyama Akira guitarist boasting one of the best techniques in Japan is a single "Crazy For Your Love" by Orchestra Melodic Metal Band PRECIOUS led by himself, the fastest threat that surpasses the world's fastest pole gilbert at the time I showed off his brilliant debut.

After dissolution of PRECIOUS, I met a former RAINBOW vocalist, Joe Lin Turner, and after participating in his album "UNDER COVER 2" (1999), half of the tracks recorded in "HOLY MAN" (2000) "SLAM" covers all songs. Since then, I've always played guitar with Joe 's Japanese performance including HUGHES TURNER PROJECT. In 2005 he received Joe as his solo album and released "FIRE WITHOUT FLAME" under the name of AKIRA KAJIYAMA + JOE LYNN TURNER.

Meanwhile, apart from co-starring with Joe, in 2003 he began activities under the name of GOLDBRICK with the current ANTHEM's Mr. Morikawa Nozo (vo), and CDs such as "GOLDBRICK", "LIVE! GROOVY NIGHTS 2003", "GOLDBRICK II" DVD "MAX BODY GROOVE" has been released.

In 2006, they provided 2 songs to the solo album "SINGER" of Taketoya Shimoyama (vo) of the present SABER TIGER (guitar also play), and furthermore an album "INTO THE DEEP" (2008 ) In the name of AKIRA KAJIYAMA & TAKENORI SHIMOYAMA.

In 2014, Kajiyama casually encountered vocalist Vikaryist Fujii Shigeki with a staggering singing ability, and since then I have often performed sessions and live, but this time, when I selected Fujii and made an album, I revived the name of GOLDBRICK. Kajiyama demonstrates its melody and sense, and GOLDBRICK 's new work, "THE BOUNDARY", completed with Fujii' s high tone voices by marveling, is exactly the world - class "Melodic Hard Rock 's masterpiece".

The product of this time is RAINBOW 's' Kajiyama' in 2016 with Takeyoshi Shimoyama (vo), Honma Otsugi (ds), Toshiro Nagakawa (key), Atsushi Hasegawa (b) etc in the name of "Rainbow Legend" "LIVE IN MUNICH 1977" Reproduction Live (Tokyo · Osaka) features bonus included. You can enjoy the pattern of the stage full of power with the best leading Japanese people gathered.