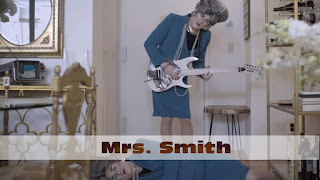 (If you were in the video and we missed your name please email us and we'll add it: mrs.smith@worldofsmith.com)

And introducing Sam Nulman as "The Happy Little Waterfall."

Noted philanthropist, tone poet, and world's most unlikely guitar hero, Mrs. Smith has captured the public imagination with her unbridled creative expression in the face of a life filled with grief and rage. With an improbable life-tale that includes a lonesome childhood of privilege, 14 marriages, and show biz stardom and obscurity, Mrs. Smith is a 20th Century creature who has burst through to the internet age to become a sensation.

Mrs. Smith is the reigning queen of the “Shred for Your Life” contest held at Webster Hall and was a featured performer at the Guitar Gods Festival in Miami opening up for guitar legends Yngwie Malmsteen and Steve Vai. A video of her shredding on the streets of the East Village was shared by Guitar World Magazine and garnered 1.2 million views. Her unique blend of musical performance comedy has been featured on NBC’s America’s Got Talent, PBS Television as well as Joe’s Pub, American Repertory Theater and Berkeley Repertory Theater. She has also been seen at 54 Below, First Avenue, Webster Hall, Ars Nova, The Laurie Beechman Theater, Upright Citizens Brigade Theater, The Bell House, Union Hall, and the legendary Bushwig Festival, among many others.

Mrs. Smith's work has been described by critics as "Off its meds!" (The Boston Globe), "Oddly poignant" (NY Times), "Purrfect!" (NY Post), and "The true face of metal!" (Unicorn Booty).