Fred Brum was studying to be a classical pianist when he was 15, and listened to Zakk Wylde for the first time. Months later, obsessing about getting those raw, visceral sounds out of a guitar himself, he picked up his first guitar, not knowing he’d be setting foot on a stage professionally one short year after and working as hired gun for many artists by the time he was 19.

A very busy session musician, he favours 7-strings and other extended range guitars, such as 8-strings and 36-fret monsters to perform his work and has developed his style and approach around such instruments. Currently, he’s endorsed by Jaden Rose Guitars, DiMarzio pickups, Sik Pik picks and Spectraflex cables.

Fred is scheduled to record with two of his bands this year and finish his own first solo record, amidst a heavy gigging schedule, and has been the lead guitarist for, among others, prog/goth metal band Ethereal. 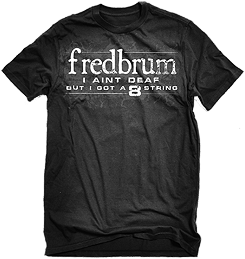 You can also get t-shirt from his online store
http://fredbrum.com/store

I hope to catch up with Fred The Shred Brum at some point in the near future for a more in depth interview... he just doesn't know it yet :)
Fred Brum