on October 23, 2011
"The Shadows Compendium", the first instrumental solo album from guitarist Stéphan Forté of French neo-classical metallers ADAGIO, can be seen below. Due in Europe on November 21 and in North America in February via Listenable Records, the CD was mixed by Kevin Codfert at XFade studio in Paris, France. Stéphan and Kevin previously worked together on the production of ADAGIO's fourth album, "Archangels In Black".

One of the songs from the CD, "De Praestigiis Daemonum", can be streamed at this location. The track, which features a guest appearance by Mattias IA Eklundh from FREAK KITCHEN, was described by Forté as "probably the most shredding song of the album. I guess it is not the easiest one to listen to, but since it's the very first song we're offering to the guitar fans, I wanted to give them an 'in-your-face' kinda track. This is also a song I've made as a tribute for Jason Becker. He is one of my biggest guitar influences ever and it's been a while since I wanted to do it, so I am very glad to share this track with you guys!"


Stéphan previously stated about "The Shadows Compendium", "When I decided to record this album, it was obvious that I wanted to work with Kevin again. We both know each other so well that sometimes we don't even need to talk while mixing. Kev knows perfectly what I want and I am 100 percent happy with the mix he did on this album. It has been a real work in common since not only he mixed it, but also did the drums programming and, of course, played all the keyboards and piano. On the bass, same thing — it was clear that Franck [Hermanny] would do the bass. He is one of the most skilled bass player I know in metal, he is in ADAGIO with me since day one and just like Kevin, he's one of my best friends, so it could not have been done differently!" 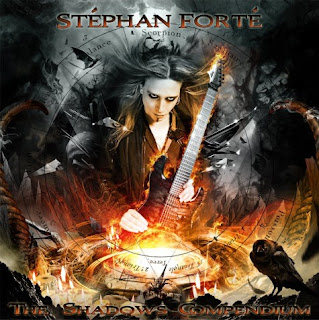 See and hear the towering composition and soloing of Adagio's Stéphan Forté and Franck Hermanny - GET YOUR TICKETS NOW... time is running out!