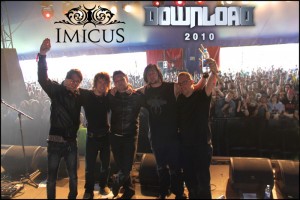 IMICUS was born out of the diverse musical influences of its members. These influences led to a sound that has been labelled both melodic and heavy while being acclaimed for its focus on an epic soundscape and strong songs heaped in dynamics. It was this approach that lead to the band signing with Transcend Records in 2009.
Following the bands signing, IMICUS announced their arrival with their first single ‘Visceral’ in October 2009. The single was a real statement of intent and featured the band’s famed focus on big riffs, big choruses and big dynamics. ‘Visceral’ was released via digital platforms such as iTunes as well as a special Ltd edition CD. It was swiftly aired on Total Rock Radio and many other stations. The band released the ‘Visceral’ video in November 2009 and quickly gained support from the likes of Kerrang! and Scuzz TV who added the video to their playlist as well as increased interest from a growing fan base.
The band’s debut album ‘Animal Factory’ was released via Transcend Records in May 2010 to much critical acclaim with national magazine Rocksound among others labelling the band the surprise package of 2010. (For media coverage – please see the press section of this site)
The release of ‘Animal Factory’ lifted the bands profile further, with the album charting in HMV’s metal pre-order chart at No.3. This led to the track ‘Veiled Oedema’ featuring on the cover mount CD of Terrorizer magazine. The band quickly returned to the studio when asked to contribute to Metal Hammer’s special edition tribute to Judas Priest’s ‘British Steel’ album with the track ‘You don’t have to be old to be wise’ – IMICUS featured alongside acts such as Disturbed on the highly collectable CD and were widely praised for re-imagining the song rather than delivering a straight cover.
The ‘Animal Factory’ album’s tracks led to airplay on Bruce Dickinson’s radio rock show, Total Rock and many other national and regional stations and coverage in many national magazines and websites.
Shortly after the album release, IMICUS were confirmed to the line-up of 2010’s prestigious Download Festival alongside some of the world’s biggest bands such as AC/DC, Bullet For My Valentine, 30 Seconds to Mars, Rage against The Machine, The Stone Temple Pilots and Aerosmith among many others. The band cemented their reputation as a live favourite with a strong performance to a packed Red Bull stage on the first day of the festival.
The band also featured on many other high profile festivals including:-
• Hellfire I – alongside Breed 77
• Hammerfest I – with Sepultura, Opeth, Skindred, Paradise Lost & More
• Hellfire II – with Saxon, Anvil, Fields of the Nephilim & Katatonia among others
• The Bulldog Bash – three years running with bands such as Motorhead, Status Quo and The Damned.
• Hard Rock Hell – with Monster Magnet, WASP, The New York Dolls & More.
The band rounded off 2010 with their headline tour of the UK in support of their debut album.
In 2011, IMICUS continued to tour ‘Animal Factory’ culminating in a set at the Bloodstock Festival at Catton Hall in Derby. The band won a new set of fans alongside other acts including Motorhead, WASP, Devin Townsend and many others.
Following a line-up change in the summer of 2011, Matt Tilley returned to bass duties to re-join Miller, Dan, Dale and Mark Weatherley, who had joined prior to the release of ‘Animal Factory’. The band began making plans for a follow up to their debut album and went on to write the first songs since the line-up change.
In October 2011, IMICUS recorded ‘The Marionette’ single and support track ‘Chameleons’ and enlisted the knowledge of legendary producer Russ Russell to mix and master the songs at Parlour Studios. The new tracks featured atmospheric layering, thickening and expanding an already epic sound as well as keeping the dynamics and engaging lyrics the bands fans already admired. A run of just 400 limited edition booklets, illustrated by Richey Beckett, were printed and released in December 2011.
IMICUS will spend the early part of 2012 launching a new single and video whilst completing the writing of their second album – mixing with Russ Russell in May before spending the summer taking the new album onto the festival circuit.
Since forming, IMICUS have also shared the stage with bands such as Enter Shikari, InMe, SiKth, Panic Cell, Reuben, Breed 77, The Deathstars, Exit Ten, Devil Sold His Soul, Orange Goblin and many others.