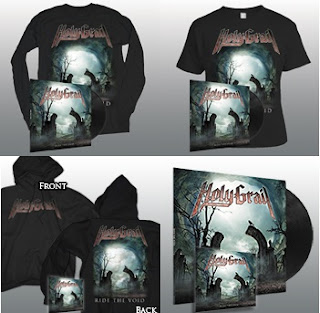 HOLY GRAIL "RIDE THE VOID" EXCLUSIVE PRE-ORDER!
Heavy metaller's HOLY GRAIL are at it again! The band has finally announced they will be releasing their second cd "Ride The Void" on January 22, 2013 via PROSTHETIC RECORDS. We've just launched a set of EXCLUSIVE pre-order packages which you can purchase directly from www.RideTheVoid.com! You can pick up several different bundles inclduing the album on either CD or LP format along with an exclusive t-shirt, long sleeved shirt, or hoodie! These will only be available for a limited time, so hurry up and get yours before it's too late!