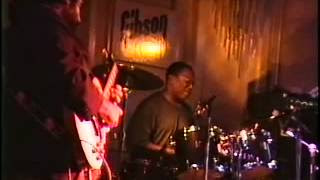 This Impromptu Jam with 3 greats BILL COBHAM, DOUG WIMBISH & JOE BERGER happened at Gibson Guitar Party in Frankfurt Germany, captured by Jon Hammond originally shown on The Jon Hammond Show *24th year NYC. COBHAM born May 16, 1944 in Panama, is one of the world's best and most influential drummers known for his jazz fusion in the 1970s, with John McLaughlin's Mahavishnu Orchestra, where he pioneered a powerful style of drumming with jazz, rock and funk influences has an enormous Discography. WIMBISH (born September 22, 1956) is a bass player, primarily known for his studio work for the rap/hip hop label Sugarhill Records and his membership of the band Living Colour. He has played for a vast range of artists, among which Jeff Beck, Mick Jagger, Madonna, George Clinton, Depeche Mode, and Mos Def. Wimbish is considered to be a pioneer in hip hop bass playing.
BERGER has engineered mixed and mastered thousands of recordings and played with John Entwistle of THE WHO and member of JON HAMMOND Band. Seen here playing a special Gibson LES PAUL, whom (Les) Joe has also worked with and Paul has appeared on Hammond's long-running cable tv show in NYC.
Enjoy! c)2007 *Info: http://www.HammondCast.com