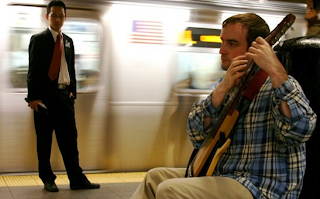 Matthew Nichols is a fingerstyle/classical guitarist living in Queens, NY. He has shared the stage with some of the best steel string guitarists in the world, including Pino Forastiere and Erik Mongrain. His music has been heard on ABC’s 20/20 and in the major motion picture, Nothing But the Truth, starring Kate Beckinsale. He was featured on NYC Sound Tracks, a reality show about up and coming New York musicians, on the MSG Network. He is also the author of NYC Busker, a book about his nine years spent playing guitar in the subways. Matthew has a bachelor’s degree in classical guitar performance from the Peabody Conservatory http://matthewnichols.com/