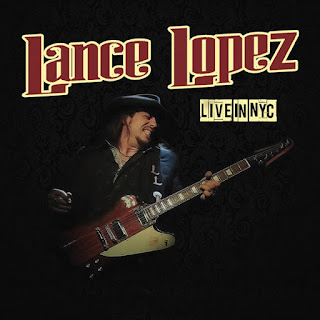 “ 'Live In NYC' was recorded on such a powerful night! It was Johnny Winter's 70th Birthday Party at a sold out B.B. King's Blues Club in Times Square...and was filled with a who's who of the blues! I played my heart out for Johnny that night, and was so happy that they were able to capture it on a recording...it's absolutely one of my finest performances I ever did in New York City.” - Lance Lopez

A music professional from the tender age of 14, Lopez cut his teeth with legendary drummer Buddy Miles, who would go on to co-produce Lopez’s debut album in 1999, and has played with virtually every notable blues musician of the 20th century! Lopez's newest project, the blues rock supergroup Supersonic Blues Machine, will release a new album in February with guest appearances by ZZ Top’s Billy Gibbons, Eric Gales, Walter Trout, Robben Ford and others!