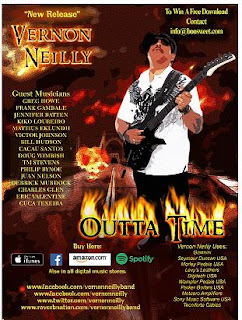 "This project 'Outta Time' took some time to finish but the time has been well worth it and you will be able to hear it soon everywhere." ~ Vernon Neilly


Los Angeles, Ca. / March 2016 - Vernon is due to release his 5th solo CD in the beginning of 2016 entitled “Outta Time” to his international fan base and the world. This CD features some of the most prominent guitar players, bass players, and drummers in the world.