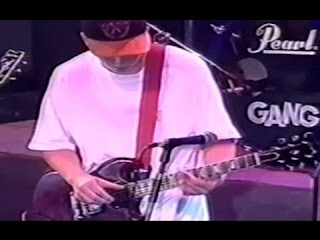 Nescafe Blues Festival 1996, John Lee Hooker cover.
Derek Trucks (born June 8, 1979) is an American guitarist, songwriter and founder of the (Grammy Award -winning) The Derek Trucks Band . He played with The Allman Brothers Band , and became an official member in 1999. In 2010 he and his wife Susan Tedeschi formed the Tedeschi Trucks Band . His musical style encompasses several genres and he has twice appeared on Rolling Stone 's list of 100 Greatest Guitarists of All Time.
"Dimples" is a song written and recorded by blues singer-songwriter John Lee Hooker in 1956. It is an ensemble piece, with Hooker accompanied by Jimmy Reed's backup band. Eight years after its first release, it became Hooker's first record to appear in the British record charts. Called a "genuine Hooker classic" by music critic Bill Dahl,[3] it is one of his best-known songs, with interpretations by several artists.