Todd Rundgren: An Evening With Todd Rundgren – Live At The Ridgefield” CD, Vinyl, DVD, and Blu-ray 2016 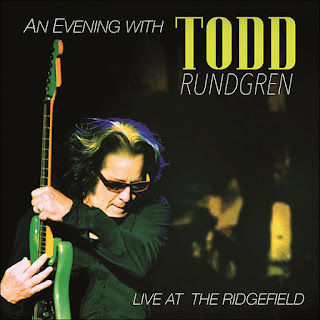 “An Evening With Todd Rundgren – Live At The Ridgefield” Released CD, Vinyl, DVD, and Blu-ray on August 26, 2016


Cleopatra Records is pleased to announce “An Evening With Todd Rundgren – Live At The Ridgefield” on August 26, 2016. Get ready for an incredible concert experience, a multi-media extravaganza available on CD, Vinyl, DVD, and Blu-ray, starring classic rock icon and famed songwriter/producer Todd Rundgren.


A Wizard, A True Star, the title of his 1973 solo album, aptly sums up the contributions of this multi-faceted artist to state-of-the-art music. As a songwriter, video pioneer, producer, recording artist, computer software developer, conceptualist, and interactive artist, Rundgren has made a lasting impact on both the form and content of popular music. He had produced more than fifty records for other artists, including Hall & Oates, Cheap Trick, Patti Smith, XTC, Grand Funk Railroad, The Band, and Meat Loaf's Bat Out of Hell.

Recorded live at the Ridgefield Playhouse in Ridgefield, Connecticut on December 15, 2015, Rundgren's new release includes some of his best known songs including “Hello It's Me”, “I Saw The Light” and “Bang The Drum”. Plus, hear/watch fan favourites that haven't been performed live in decades, including songs from TR’s unforgettable Utopia and Nazz anthems.